(0 User reviews)   789   504
By OLS Admin Posted on Mar 23, 2021 In Category - Nyerere Dialogue Lecture
Ng’wanza Kamata 978-9976-9903-1-7 Nyerere Resource Centre 2015
This, Ng’wanza Kamata’s lecture, titled Mwalimu Nyerere: Pan African Nationalist or Nationalist Pan African? was delivered in November 2015. In this lecture, he traces and compares the origins of Nkrumah’s and Nyerere’s Pan-African thought, his main thesis being that whereas Nkrumah arrived at territorial nationalism via Pan-Africanism, Nyerere’s Pan-Africanism was through territorial nationalism.

Dr. Ng’wanza Kamata delivered this lecture in November 2015, tantalisingly titled Mwalimu Nyerere: Pan African Nationalist or Nationalist Pan African? In this lecture, Kamata traces and compares the origins of Nkrumah’s and Nyerere’s Pan-African thought. His narrative revolves around the thesis that whereas Nkrumah arrived at territorial nationalism via Pan-Africanism, Nyerere’s Pan-Africanism was through territorial nationalism.

This lecture, together with Professor Adebayo Olukoshi’s lecture on the launching of the NRC in March, 2015, discuss vital issues central to Mwalimu Nyerere’s political thought and practice. Development and Pan-Africanism occupied virtually Nyerere’s whole political life. Just two years before his death, Nyerere returned to the question of Pan-Africanism in an extemporaneous speech he made in Accra on the 40th anniversary of Ghana’s independence. In that fascinating exposition, Nyerere postulated that the first generation African nationalists had set themselves two tasks - African liberation and African unity. Liberation in the sense of independence from colonialism and minority settler regimes had been accomplished but his generation did not quite succeed in uniting the continent. That was the task the new generation ought to shoulder. Each generation must discover its mission and either fulfill or betray it, Fanon said. Fighting for the insurrection of Pan-African ideas would be an apt mission for the current generation of African intellectuals, as Nyerere suggested. We hope that the publication of this lecture would contribute towards that insurrection.

There are no reviews for this eBook. 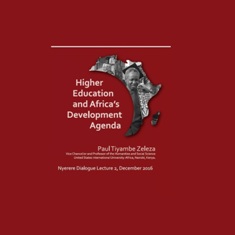